Steak is kind of my boyfriend and my thing. In our opinion you really cannot beat a good steak. 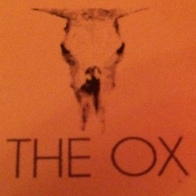 So for my birthday he booked The Ox (Link) as a surprise, I knew he was taking me out but had no idea where so I was feeling a little anxious as I had recently be accidentally glutened whilst eating out and hadn’t been able to call ahead etc to check there were options.

When we arrived outside the restaurant I was so excited I had wanted to go to The Ox since its opening last year, it is re known for its fabulous stakes and cocktails (which is to be expected as it is twined with the Milk-thistle).

The restaurant itself is simply fabulous, it is underground and looks like something straight out of prohibition era, we were seated and ordered cocktails straight away all amazing! We I looked at the menu I was really nervous as it didn’t have a key which stated what and wasn’t GF. However I had nothing to worry I asked the waitress to go through with me what I could and couldn’t eat.

Never in my life have I met someone let alone someone in a restaurant who was so excitable by GF, she new exactly what I could eat and not, recommended her favourites. Pretty much everything on the menu was gluten free or could be adapted to become gluten free including all of their steak sauces and chips.

ordered the Charcuterie Board to share as a starter, she explained there were a couple of items on it that I was unable to eat but that we would get extra of the other items. My partner still had the bread but it was on a separate plate, and I asked for some gem lettuce leaves that I could use for the pate instead of bread.

This was absolutely mind blowing everything on this board was amazing! I had to resist picking it up and licking it clean when we were done; something which is apparently frowned upon is nice swanky restaurants.

For mains I ordered the Rib Eye which came with triple cooked chips and a sauce of your choosing all gluten free. I chose pepper corn which is my absolute favourite, and something which I haven’t been able to eat out since going GF.

All of their steaks are cooked in a charcoal grill (Unless you order it blue) which just gives it this incredible smoky taste, it was in fact one of the most incredible steaks I have ever had and believe you me I have had many a steak.

We wussed out on pudding as we were so very full so cannot comment on them.

I had no gluten reaction at all to this meal, not even bloating which is surprising considering how full I was.

This restaurant I have to say is one of the best steak restaurants in Bristol and I will defiantly be going back, I give them a 10/10 the service was incredible and so clued up on GF as well as being very attentive and friendly and the food was sublime. The only downer is that it was quite pricey, unless you go to their early bird deal.